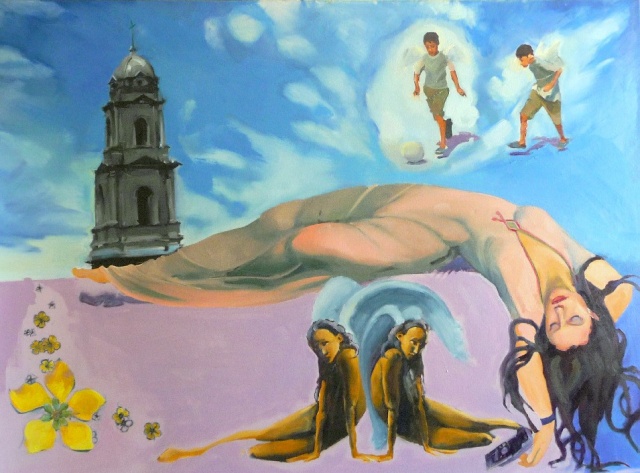 Inspired By Henry Fuseli: The nightmare

Sleeping creativity- The paralyzed, fainting or relaxing woman with a cell phone on her hand represents her destruction through too much attention to technology, also being exhausted from Ideas and relationship games. My nightmare is less morbid and more graphic. The two boys in the sky as well as the church represent traditional, active and playful interaction with the world without technology. The two female angles represent the balance between necessity and need. Yellow flowers my own touch of design. This moment captures the restlessness of human mind, and raises the question: how do I express this? I am a traditionalist and I like to look at the past for answers.

The woman in the dramatic sleeping pose is inspired by another painting. Henry Fuselis' the Nightmare (1871) represents in his paintings the morbid oppression during sleep, resembling the pressure of weight upon the breast or today called Sleep Paralysis they believed back in the day that these were caused by demons. Price upon Request